"A digital archive recently launched by the Bancroft Library sheds new light on the mass internment of Japanese Americans during World War II and their resettlement immediately following the war.

The Japanese American Evacuation and Resettlement Study Digital Archive is based on interdisciplinary academic research conducted by trained observers reporting from “war relocation centers.” The collection includes nearly 100,000 original manuscript items — among them personal narratives never before made public…” "The Supreme Court’s 1944 decision in Korematsu v. United States was a disaster. In endorsing an executive order that required 110,000 Americans of Japanese ancestry to be removed from their homes and confined in detention camps, the court relied on wartime hysteria streaked with racism, sullying its reputation and damaging the constitutional principles it was meant to uphold.” 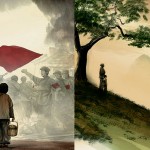 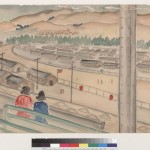 On the Tanforan detention facility, the Densho Encyclopedia notes:

“The Tanforan Assembly Center was one of seventeen temporary detention camps established by the U.S. Army to hold Japanese Americans forcibly removed from the West Coast until more permanent concentration camps could be constructed. Tanforan was built on the site of the Tanforan horse racing track, and some of the inmates lived in the former horse stalls. Accommodating 7,816 Japanese Americans, it was the second most populous of the ‘assembly centers.’ A shopping center sits on the site today; a small historical marker commemorates its World War II history.”

The Tanforan Assembly Center was located in San Bruno, California. 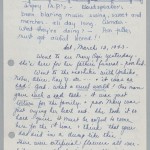 “She took it so hard —guess it must be awful to come here for the first time + think that your dad died in a dump like this.”