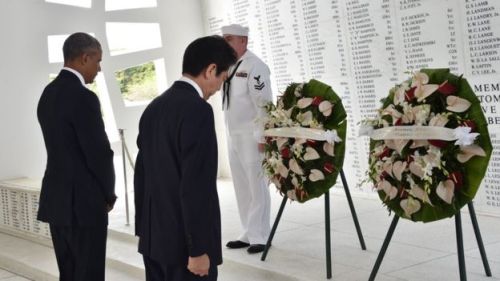 “Japanese PM Shinzo Abe has visited the US naval base at Pearl Harbor, where he offered ‘sincere and everlasting condolences’ to the victims of Japan’s attack on the base 75 years ago. ‘We must never repeat the horrors of war again, this is the solemn vow the people of Japan have taken,’ he said.”

“Japanese PM Shinzo Abe has visited the US naval base at Pearl Harbor, where he offered ‘sincere and everlasting condolences’ to the victims of Japan’s attack on the base 75 years ago. ‘We must never repeat the horrors of war again, this is the solemn vow the people of Japan have taken,’ he said.”


“Chinese victims who in World War II were forced into labor by the predecessor of a Japanese company, Mitsubishi Materials, reacted to a legal settlement.” (AP) 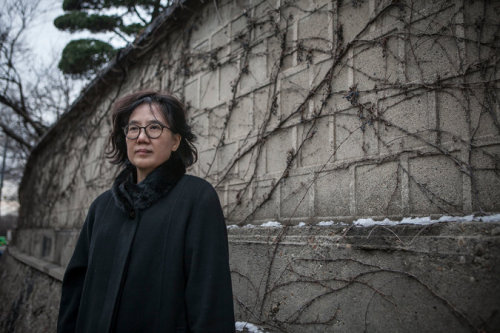 “In the early 20th century, the official history holds, Japan forcibly took innocent girls from Korea and elsewhere to its military-run brothels. There, they were held as sex slaves and defiled by dozens of soldiers a day in the most hateful legacy of Japan’s 35-year colonial rule, which ended with its defeat in World War II.

As she researched her book, combing through a rich archive in South Korea and Japan and interviewing surviving comfort women, Ms. Park, 58, said she came to realize that such a sanitized, uniform image of Korean comfort women did not fully explain who they were and only deepened this most emotional of the many disputes between South Korea and Japan.

In trying to give what she calls a more comprehensive view of the women’s lives, she made claims that some found refreshing but many considered outrageous and, in some cases, traitorous.“ “A Chinese campaign to have documents related to Japan’s use of wartime sex slaves and its bloody invasion of Nanjing recognised by Unesco has sparked a new round of diplomatic tension between Beijing and Tokyo. A Unesco panel in Abu Dhabi will announce on Friday successful nominations for inclusion in the UN body’s Memory of the World programme, amid efforts by Japanese officials to block the bid.”

For more, see Justin McCurry, “Wartime Sex Slaves at the Heart of UN Battle Between Japan and China,” The Guardian (8 Oct 2015) “Japan’s Prime Minister Shinzo Abe on Friday released a statement marking 70 years since the end of World War II.The statement had been watched closely by neighboring countries on whether it would include an apology for Japan’s wartime acts as expressed by its past leaders. Former Prime Minister Tomiichi Murayama, who issued a groundbreaking statement in 1995, had also called on Mr. Abe to sincerely apologize for the country’s wartime aggression.” “Using the carefully chosen words that govern reckonings with Japan’s militarist past, Prime Minister Shinzo Abe reiterated his country’s official remorse for the catastrophe of World War II on Friday, the eve of the 70th anniversary of the war’s end.In a nationally televised address, Mr. Abe described feelings of ‘profound grief’ and offered ‘eternal, sincere condolences’ for the dead. He said Japan had inflicted ‘immeasurable damage and suffering’ when it ‘took the wrong course and advanced along the road to war.’

But in a potentially contentious break with previous expressions of contrition by Japanese leaders, he did not offer a new apology of his own.” “’After the war ended, I came back and saw the destruction and the place where my sister was killed,’ Mr. Lee said in an interview. ‘That street had houses on both sides. Originally there were two-story buildings, but they were completely gone.’“ “President Park Geun-hye of South Korea urged Japan on Sunday to have the ‘courage and honesty’ to admit to its historical wrongdoings against Koreans and other Asians, including its enslavement of Korean women in military brothels during World War II.

'As Germany and France overcame conflict and mutual enmity and became leaders in building a new Europe, it is time for South Korea and Japan to write a new history together,’ Ms. Park said in a nationally televised speech. But despite their geographical proximity, the two nations could not get close in heart because of tensions surrounding historical issues.’

Ms. Park delivered her speech to mark the 96th anniversary of the March 1, 1919, uprising against Japan’s colonial rule of Korea, which lasted from 1910 until Japan’s defeat in World War II in 1945.” "Japan’s foreign ministry requested that McGraw-Hill delete a passage containing a reference to comfort women from a text on world history used by high schools in California. The passage says that Japan’s imperial army ‘forcibly recruited, conscripted and dragooned as many as 200,000 women aged 14 to 20’ to serve in military brothels.

But at a meeting with officials from the Japanese consulate in New York, McGraw-Hill refused to change the passage, saying it was ‘based on historical facts,’ according to the Sankei Shimbun.

Watanabe welcomed McGraw-Hill’s refusal to bow to pressure, but said Japanese children risked growing up ignorant of their country’s past.

Censoring textbooks would be devastating for pupils, she said. ‘Children in neighbouring countries know the truth about the Japanese military’s conduct in Asia … only Japanese children would be kept in the dark, but they have the right to learn the facts of history.’”