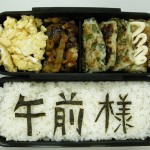 A Japanese boxed lunch Bento, with “Gozensama” (a term wives use for their husbands who work late) written on the rice. Image by Flickr user Y.S.K.31 (CC BY-NC-SA 2.0)

With a twist of humor, moral and technical support has been pouring in across social media sites for Japan’s “corporate slaves” or shachiku as they are referred to in Japanese slang.

There is even an App! It’s called “Friends of Shachiku“.

The application allows shachikus to automatically “like” and “share” their boss’s Facebook posts. It also generates bookmark URLs of what their boss has shared or liked on Facebook. The app even has a feature that allows you to decide how frequently you want to “like” your boss’s post; all you have to do is press the button, “Be a desirable shachiku“.